According to the Bulgarian authorities, 910,594 refugees from Ukraine have entered Bulgaria since the 24th of February, of whom 54,151 persons have remained in the country. The majority of refugees from Ukraine are women and children, increasing family separation and vulnerability to violence, exploitation and abuse.

Though Bulgaria is currently perceived as a transit country by over 50% of Ukrainians, statistical comparative data of Ukrainians fleeing the war and transiting through neighbouring countries shows that Bulgaria has one of the highest ratios of Ukrainians who stay for longer period and/or permanently in the country.

On March 3, 2022, the EU member states agreed to activate the Temporary Protection Directive. The Council of Ministers of the Republic of Bulgaria voted in favour of the measure on March 9, 2022. The Directive allows people who have registered as seeking temporary protection in Bulgaria to receive access to social and health services, education, and be able to join the labour market in the country.

According to the official information on July 28, 146,493 persons have registered under the Temporary Protection Directive from all reported Ukrainian nationals who have entered the country visa free for up to 90 days stay. More than 25,000 people have further received shelter under the terms of the Bulgarian program approved by the government for hotel facilities which provide accommodation to people fleeing the conflict in Ukraine. Access to education, immunization of children, social assistance to vulnerable groups and other support measures are under discussion between the government, relevant institutions and civil society organizations and many normative acts remain to be further modified and aligned to the new directive.

Since the start of the conflict, almost 10 million people have already crossed into adjacent countries. As of 18 July 2022, 870,421 refugees from Ukraine are estimated to be third country nationals (TCNs). On the ground there is a lack of resources for ensuring transportation, accommodation and assistance for refugees and TCNs.

The work of IOM Bulgaria’s protection teams and Rapid Response Unit (RRU) is key in providing first-line, swift and targeted support to conflict-affected population. Our activities are expected to strengthen reception system, particularly in provision of direct assistance and access to information and specialised services.

Persons eligible for CBI or emergency accommodation assistance must meet one or more of the following criteria:

As more than 20 000 citizens of Ukraine are currently accommodated in hotels on the Black Sea coast in the regions of Burgas and Varna, IOM Bulgaria has operational response units in the two regions.

Contact details for the IOM teams in Burgas and Varna

Useful information for people fleeing the conflict in Ukraine 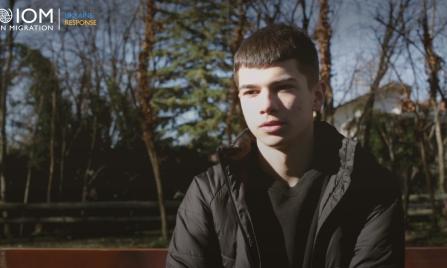 Psychological support and consultations for people, fleeing the war in Ukraine

Art therapy for the children from Ukraine

Subscribe to IOM newsletter to receive the latest news and stories about migration.